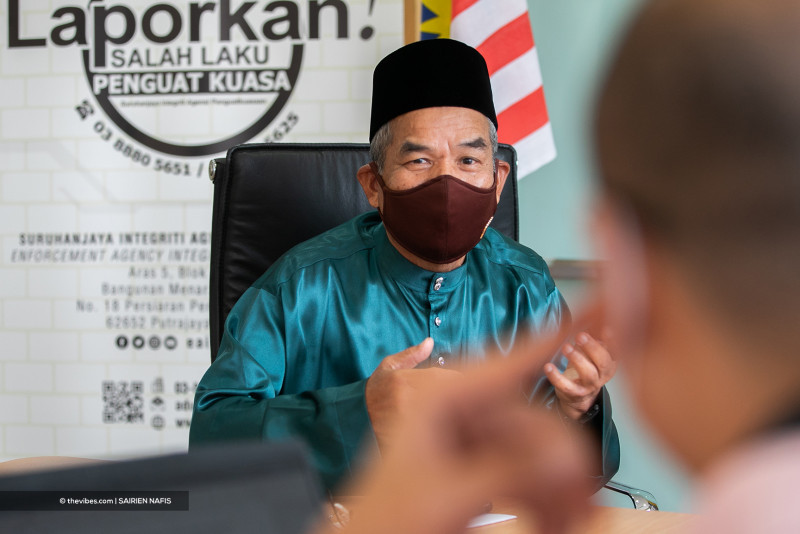 EAIC chairman Tan Sri Mohd Sidek Hassan says the errant behaviour of government officers, such as practising cronyism in dishing out contracts, during his tenure in the civil service only appeared less common back then because people were less aware of such activities. – SAIRIEN NAFIS/The Vibes pic, May 4, 2021

While this could be due to the increased interaction between police and the public due to the country coming under movement restrictions for more than a year, he also believes it is due to the people’s increasing intolerance of corruption, bribery, and abuse of power by uniformed enforcement personnel.

Sidek told The Vibes that while corrupt practices were reported during his tenure as the government’s chief secretary from September 2006 to June 2012, the volume was not as high as it is now.

“As a former civil servant, people may think that it (corruption) didn’t occur under my watch the same way it does now. I’m also a member of some WhatsApp groups where people say that it didn’t happen in our time. I say yes, but maybe it wasn’t reported.

“I’m saying maybe it (corruption) happened before and was possibly even worse. But I think people are more conscious of it now, and they also have smartphones (to record wrongdoings by public personnel),” he said.

So far this year, the EAIC has received 336 complaints, of which 225 were against the police force.

The former civil servant also acknowledged that, with only 78 staff members to monitor 150,000 policemen across the country, the task is almost impossible.

Apart from the police, the EAIC also monitors 20 other enforcement agencies, including Immigration and local authorities.

The police have come under more scrutiny following revelations of cartels and corrupt senior officers by none other than former inspector-general of police Tan Sri Abdul Hamid Bador.

Sidek shared his disappointment with the number of corruption cases being investigated but said he is happy that they are being addressed by the authorities, such as the Malaysian Anti-Corruption Commission (MACC).

He believes that the errant behaviour of government officers in practising cronyism when dishing out contracts during his time in the service seemed more acceptable then because people were less aware of such activities.

“For example, it’s now a no-no if an officer gives business to his family or friends. Maybe it wasn’t a no-no before, and no one reported it at that time. Don’t be disheartened by all those reports. I think it’s good that we talk about it, but don’t just talk; we must act on it.

Sidek also noted the advantages of the advent of social media, coupled with viral videos and photographs of errant enforcement officers, which has made the public increasingly aware and increased pressure on government personnel to behave themselves.

For instance, the e-Aduan portal has received many complaints from the public who attach pictures of officers not adhering to the Covid-19 movement control order’s standard operating procedures.

“We’ve received complaints of officers not wearing masks or officers having a meal together without exercising social distancing,” he said, adding that this makes the job for the 10-year-old EAIC easier.

Noting that this pattern of public pressure is not unique to Malaysia, Sidek noted that in the United States, more members of the public are becoming increasing intolerant of police brutality and racism.

He cited the recent police killing of 13-year-old Adam Toledo by officer Eric E. Stillman, and the subsequent storm that Chicago's first black female and gay mayor Lori Lightfoot is facing over the boy’s tragic death.

“That (the boy’s killing) happened after George Floyd (who was also killed by a US police officer in Minneapolis, Minnesota). We think that there’s more abuse now of policemen against people of colour in the US. But I don’t think so.

“There are more reports, yes. But I think now, people are more conscious of it. I think there were more (killings) before when the law wasn’t as favourable and there were no smartphones. That doesn’t mean there were none before.” – The Vibes, May 4, 2021