How will IPCMC treat complaints against IGP, integrity chief? - Caged 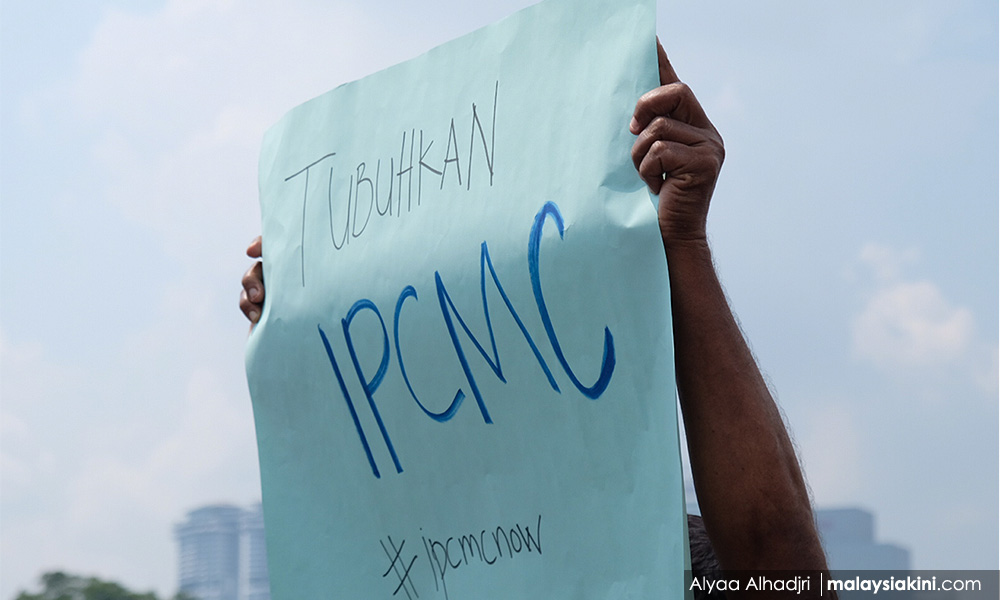 Pressure group Citizens Against Enforced Disappearances (Caged) is concerned that the structures set up to handle police misconduct may never deliver results.

"Eight months ago, the police department with responsibility for Integrity and Compliance to Standards (JIPS) was aware of potential charges of misconduct against numerous officers," said Caged in relation to the Suhakam Inquiry into the abductions and disappearances of Amri Che Mat and Raymond Koh.

In a statement today, Caged said that eight months on, the public doesn’t know what action, if any, JIPS has taken against any of these officers.

The group repeated its conflict of interest argument against the presence of JIPS head Zamri Yahya on the Special task force assigned to investigate the disappearances.

"We have also publicly complained that Zamri’s boss, IGP Abdul Hamid Bador should have ordered him (Zamri) off the task force because he has a conflict of interest.

"Only the insane will believe the police will investigate themselves fairly in this matter," said Caged, explaining why it has not lodged a complaint with the police after the Suhakam Inquiry which found that Koh and Amri, who vanished in 2016 and 2017 respectively, were victims of enforced disappearance and that members of the Special Branch were behind those disappearances.

Caged said it has not lodged a complaint with the Enforcement Agency Integrity Commission because the EAIC is a toothless tiger.

It also detailed why it may have problems filing complaints about Zamri and Abdul Hamid to the proposed Independent Police Complaints of Misconduct Commission (IPCMC) as it stands after the first reading.

The IPCMC Bill is subject to change as Putrajaya engages stakeholders on the long-awaited initiative.

Tabled for first reading in the previous parliamentary session, de facto Law Minister Liew Vui Keong said last week that the bill could be amended ahead of its second and third readings.

"The subject matter of our complaint is a conflict of interest. The bill is

for misconduct only and not complaints," said Caged spokesperson Rama Ramanathan in a statement today.

"Since the Police Regulations and Standing Orders are Official Secrets and conflict of interest is likely to be in them, our complaint may be rejected by the IPCMC.

However, it said the bill includes as misconduct “any act which is unreasonable, unjust, oppressive or improperly discriminatory," so the group may lodge a complaint that Zamri “unreasonably” accepted a role in the task force.

The proposed Commission’s Disciplinary Board will have the power to choose and hand down the punishment, from one of the following: warning, fines, forfeiture of emoluments, deferments of salary movements, reduction in rank or dismissal.

However, Caged noted with concern that the IPCMC's board appears not to have the power to question the conclusion of the IPCMC's Complaints Committee.

"If we complain about the IGP and the committee agrees to investigate, it is unclear to what extent the process applies. This is because the bill requires a 'Special Disciplinary Board' to be set up to hear the complaint.”

"Will the IPCMC accept our complaints of conflicts of interest? If it does, how long will it take to complete the investigation? Will it find them guilty?" asked Caged.

The group also claimed that the exclusion of former and retired police officers from the scope of the IPCMC was one example of how the proposed bill is weaker than the 2005 draft by the Police Commission.