Police, GIACC agree on need to set up IPCMC 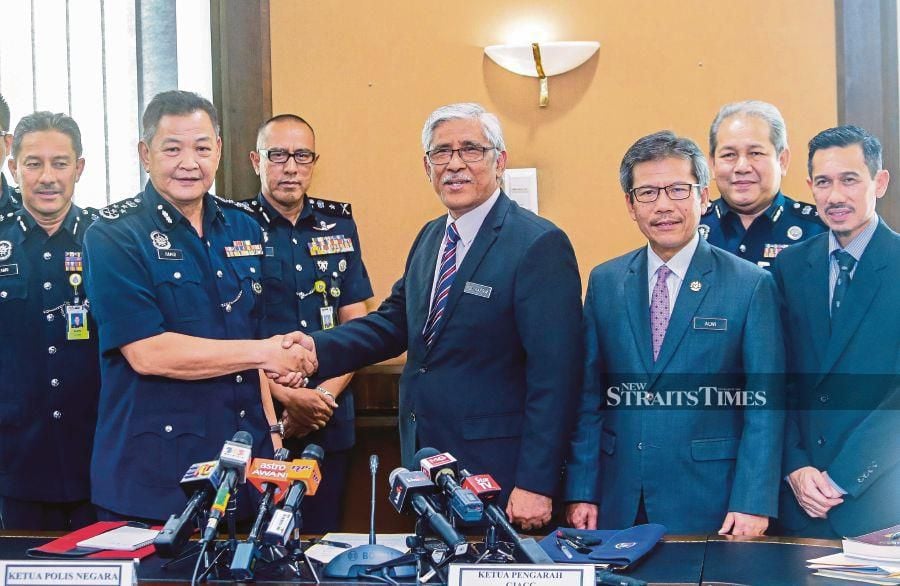 PUTRAJAYA: The National Governance, Integrity and Anti-Corruption Centre (GIACC) is positive the Independent Police Complaints and Misconduct Commission (IPCMC) will be established this year.

Its director-general, Tan Sri Abu Kassim Mohamed, said this was after GIACC and police came to an agreement on setting up the commission at a special meeting.

He said the discussion had yielded positive feedback from the representatives of the police association, federal police Integrity and Standard Compliance Department (JIPS) as well as newly-minted Inspector-General of Police Datuk Seri Abdul Hamid Bador.

“We had heart-to-heart discussions on the matter.

“Police raised several concerns to us and we have provided explanations to them.

“In principle, there are no objections towards the establishment of IPCMC.

“Police are also in support (of setting up) the IPCMC,” he told reporters after the meeting at the GIACC office.

A total of 40 representatives from the police force and GIACC were present at the meeting.

Previously, former IGP Tan Sri Mohamad Fuzi Harun had objected to the setting up of IPCMC, which would have the power to take disciplinary action against members of the force.

Fuzi had said there were concerns that the IPCMC would want to take over the power of the Police Commission which was set up under Article 140 of the Federal Constitution on issues regarding disciplinary action and investigations.

Abu Kassim said, however, several adjustments had to be made to the proposed IPCMC Bill based on the concerns raised by police, before it is finalised and brought to the Cabinet for approval, prior to being tabled in Parliament.

He added that, in the next couple of weeks, another technical meeting would be held with police to finalise the bill.

Among the concerns raised by police was whether the IPCMC would have the power to prosecute.

Abu Kassim said GIACC explained that the IPCMC was only a disciplinary body, and as such had no power to prosecute any criminal cases other than cases involving disciplinary misconduct.

“IPCMC would not take over the role of the police and JIPS in their investigation.

“But, IPCMC and police could carry out investigations together.

Abu Kassim said the amended bill would likely be brought before the Cabinet after Hari Raya Aidilfitri.

Meanwhile, Hamid said police were satisfied with the explanation provided by GIACC and commended the centre for its willingness to allow two-way discussions.

“The things we were concerned about before have been properly explained. There are no more concerns now.

“In reality, the IPCMC will not take over or abolish the power of police.

“Through IPCMC, integrity among members of the force will be upheld in carrying out their duties and responsibilities,” he added.

Last month, Prime Minister Tun Dr Mahathir said the IPCMC would be free to carry out investigations on the police force without any government interference.

The original bill for the IPCMC, which was drafted in 2005, was a result of engagement by police with civil society groups and representatives from the Bar Council in a Royal Commission of Inquiry (RCI) which later called for a review of certain aspects of police authority.